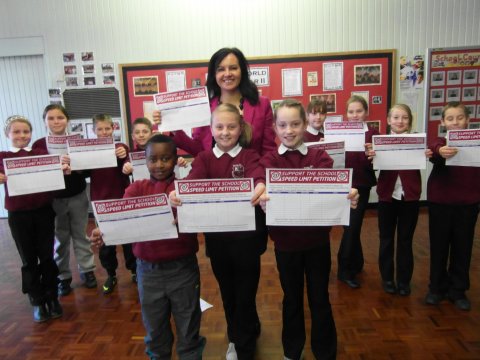 Road safety campaigners say that schools are throwing their support behind the campaign for speed limits to be reduced near schools.

Don Valley MP, Caroline Flint has written to all of the schools in her constituency and the response has been an overwhelming YES.

Said Hayfield Lane Primary Headteacher, Chris Round: “We fully support the proposals to reduce speed limits near our school.  It is a huge concern to us, especially after a pupil was knocked off his bike just before half term.  We know that many cars speed past our school as our School Council has checked traffic speed with the police in the past.”

Simon Martin, Headteacher of Castle Academy, Conisbrough said:  “I conducted a survey of parents and the results were that 92% of parents welcomed Caroline Flint’s proposals to reduce the speed limit near schools.  For several years we have expressed concerns, especially about the main Mexborough-Doncaster Road, without success.”

Said Vilma Orchard, Headteacher of Grange Lane Infant Academy, Rossington:  “We would welcome the proposal for schools to have lower speed limits.  Every year we do speed awareness with the pupils and they make up signs to encourage drivers to act responsibly near our school.”

Said Caroline Flint:  “Over 30 schools have already contacted me in support of this proposal.  Of course we need to educate drivers and pupils about road safety, and of course, the crossing patrols are valued, but if we are going to change the road safety culture then we can start by making drivers think “SCHOOL AHEAD. 20’S PLENTY”

Ms Flint criticised Mayor Davies response as complacent and penny pinching.  “The Mayor knows that 20mph zones are not expensive.  He also knows that apart from two schemes he inherited from Mayor Winter, he has done nothing to reduce speed limits near schools.  Several schools and parishes have raised the issue of traffic speed in the three and half years he has been Mayor.  And every time, they get the brush off.  Well schools are now making their voice heard and it’s time he acted.”