Caroline's Speech on the Future of Green Gas 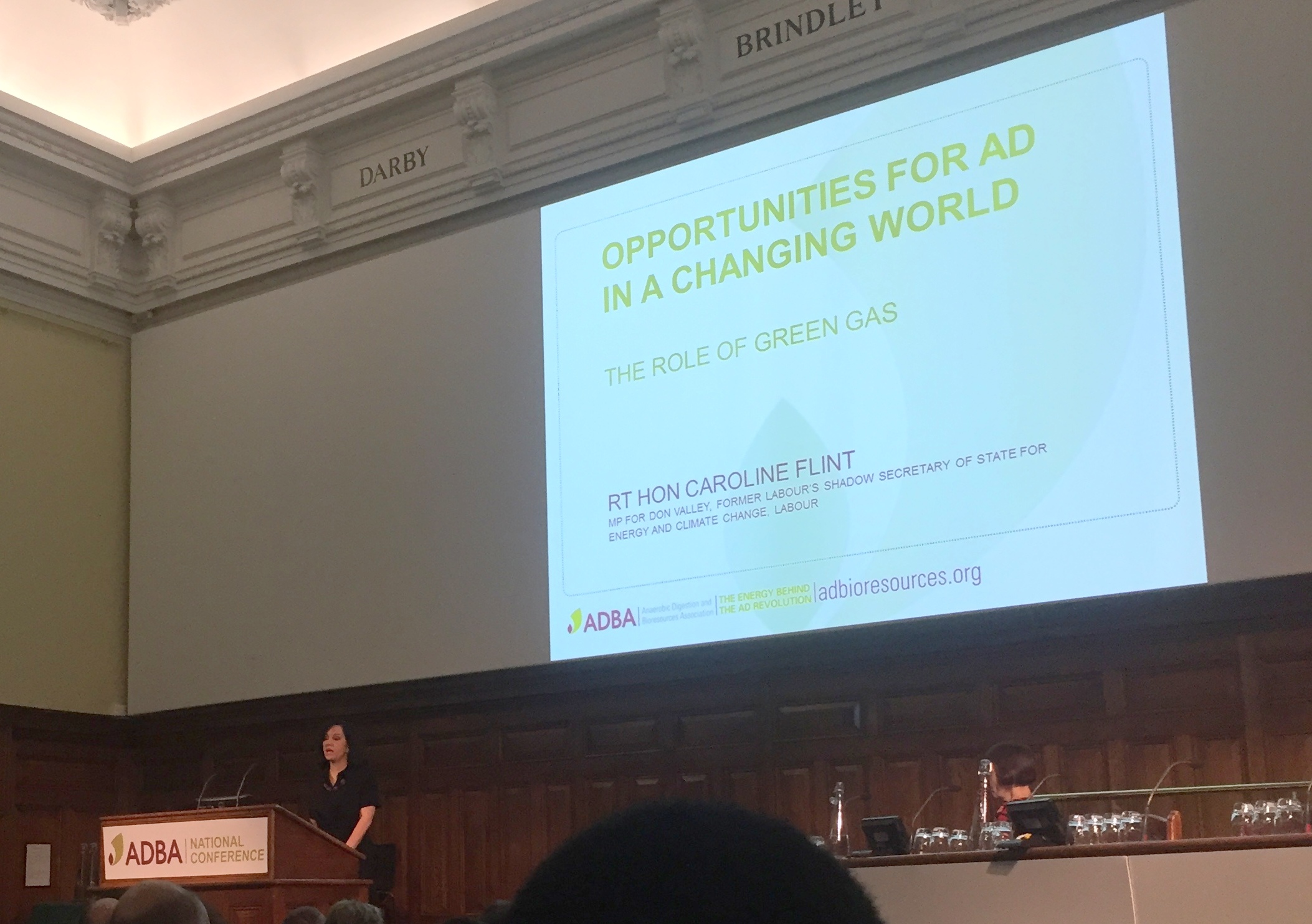 Speech by Caroline Flint to the National Conference of the Anaerobic Digestion & Bioresource Association (ABDA), 8 December, in London.

It’s great to be here and thank you for inviting me to share my thoughts at this conference.

2016 didn’t quite turned out the way many predicted – though in summer 2015 I did make one prediction that came true.

Though it wasn’t about Brexit, Trump or Leicester City.

Following the General Election, I wrote an article about the possible consequences of a Conservative majority Government entitled ‘Winter is Coming’, in which I suggested that the Department for Energy & Climate Change would be gone before the end of the current Parliament.

Less than a year later, it was gone.

With the new department of Business, Energy and Industrial Strategy we wait to see the Government’s next steps on energy efficiency and renewables.

Plenty for Greg Clark and colleagues to focus on.

I believe the case for green gas, specifically with regards to heat, is even more pressing.

Indeed, it should be an integral part of any Government’s medium- and long-term planning.

In 2013, I questioned why the conversation was always dominated by power - the production of green electricity – but never heat?

Policy-making in the UK – and across Europe – has been lopsided.

Attention and investment has focused upon how to clean up electricity.

We have neglected tackling the other major pillar of our energy mix: gas.

If more than 80% of UK homes are heated by gas, and the UK has one of the world’s most advanced gas networks, then we need a clean heat strategy.

By 2050, 80% of the current buildings will still be standing, gas production and consumption will be just as relevant.

Heating accounts for half of UK energy consumption and a third of the UK’s carbon emissions.

The challenge cannot be ignored.

We also know that using biogas to power turbines to generate electricity is inefficient.

From burning gas to heat water to generate steam to move a turbine to generate electricity loses energy at every stage.

Even the latest plants only claim a 60% efficiency.

Using this gas to heat homes makes most sense.

Working with what you’ve got

Under the Coalition and under the current government, the official heating policy is still orientated on the electrification of heat.

I am not convinced that this is our best way forward.

It is one thing to change the fuel that you put into our system.

To go into every household, and every building, that relies on gas for heating and eating, and take out their boilers, is on another scale entirely.

When making decisions that affect households up and down the country, I think it is incumbent upon the Government to start with the question: How do we work with what we’ve got?

What we have got is a sophisticated gas network that is currently being upgraded, a process which will be completed within the next 10 years.

More durable plastic pipes mean that we can consider a range of options to replace natural gas.

Some in the Green Lobby advocate putting hydrogen into the grid, instead of pursuing biogas options.

But this too would require replacing every gas boiler and every gas oven with one that is hydrogen-compatible.

Better to green our existing infrastructure than put the public’s goodwill for clean energy measures to the test.

This is why biogas deserves our attention and support.

My constituency is home to Vulcan Renewables, a biogas plant.

Its digester consumes 25,000 tonnes of feedstock a year, producing enough biomethane to heat 3,000 homes in winter and 60,000 in the summer.

A local couple farm 600 acres. Apart from the rent they receive for this plant sitting on their land, three-quarters of their production goes into fuelling this plant.

They work co-operatively with local farmers who get to take away the organic manure by-product of the process.

The CO2, once separated from the gas to make it compatible with the grid, is so pure it can be sold to the drinks industry.

This gas isn’t used to heat homes, but shops. Along with the production from nine other plants, it has been purchased by Marks & Spencer, whose stores are to be heated by renewable energy.

In Don Valley, this is the contribution of one firm and forty farmers.  £9 million invested in the plant, using mainly German and French technology, but the jobs and supply chains are increasingly local.

Not only am I a fan of this enterprising plant, so is the Leader of the Opposition.  I took Jeremy to visit the site in June and he was so taken with it, he offered to work a weekend on the farm.

But it’s not all about anaerobic digestion.

As well as the important contribution of plants like Vulcan, National Grid and others have made great strides with synthetic natural gas, or bio-SNG.

Its Swindon plant was given the go-ahead within the last fortnight, and is expected to be operational – providing gas for transport and heating – by early 2018.

They suggest that it could increase the annual production of renewable gas in the UK to 100 TWh- a massive 30 to 50 per cent of future domestic demand.

The key to its success is simple. Waste.

A further 8% is exported to Europe.

The UK’s growing population ensures domestic waste is likely to remain plentiful, and may increase.

This alternative should be a highly attractive option for government investment and support.

So what should change?

The potential for green gas is not disputed.

The technology is less challenging than, say, carbon capture and storage, and sites are much smaller than your average onshore wind farm.

A typical bio-SNG plant would be about eight hectares, easily located on industrial parks, commonplace on the edge of most towns.

There are 4 key areas where the Government could make a real difference.

One: updating public attitudes towards the nature of waste.

As an MP, I know that that any facility with the term “waste” in the title will arouse local mistrust, action-groups, and campaigners.

Just as the public learned about the virtues of recycling, so they need to appreciate that the waste used in biogas plants is not harmful.

This Government and the Coalition have patchy records of support for renewables, undermining confidence and investment.

This is despite the fact that the Renewable Heat Incentive will cost more than £1 billion by 2020.

We need a positive, stable regime if we are to support growth.

BEIS must work closely with DCLG.

England should follow the example of the devolved administrations and require the collection of food waste separately, to provide a ready feedstock for local plants.

Sites and permission for green gas plants, which can be accommodated on typical industrial parks, away from residential areas, could be identified by the Government and the Infrastructure Commission as a National Infrastructure Priority.

Four: Not forgetting about transport.

Leading firms, such as the John Lewis Partnership, are already committing themselves to gas-powered vehicles.

To replace diesel fleets with by gas-powered vehicles, we will need networks of gas filling stations.

This requires coordinated Government policy, not simply a market-led response.

For a truly low carbon future, rather than thousands of UK homes benefitting from green gas, it should be millions.

It is within the capacity of Government to revolutionise our gas supply.

To complete the circle from farming to food, to waste, to gas.

The Government’s ambition should be to build a consensus that ties in opposition parties, creating long-term continuity of policy.

We need to see collaboration across Whitehall, local government and public bodies that takes in waste management and transport infrastructure too.

And we need a consistent set of financial incentives, not just subsidies that stop-and-start.

Green gas has been overlooked for too long.

Bold action now could set us on a path to fundamentally change our consumption of an entire fossil fuel.

It offers a positive and pragmatic alternative to natural gas, using existing infrastructure and reducing natural gas usage – and, as a consequence, reducing carbon emissions.

It can help us to better deal with our waste.

It can provide greater energy security.

Replacing gas from Qatar with gas from Doncaster, and playing our part to act against climate change – that seems to me a good way of “thinking global”, and “acting local”.

I’m convinced this challenge can be met.