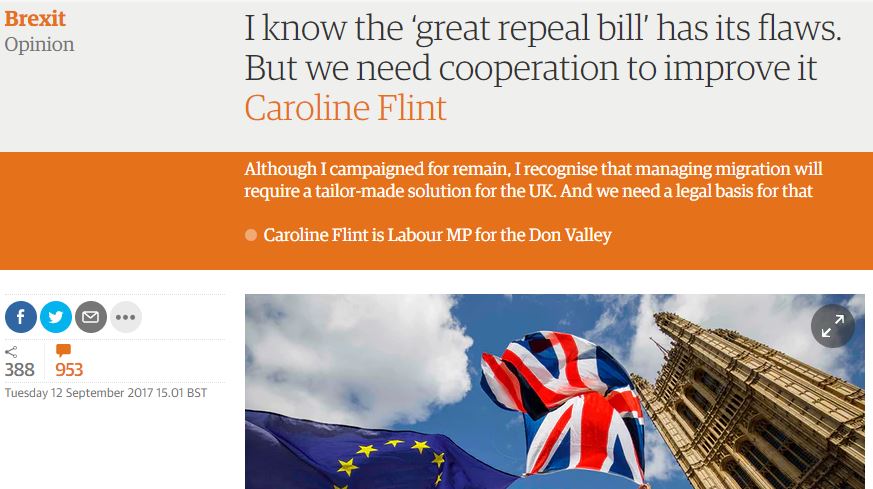 It seems I have adopted a rather controversial view about Brexit: that, perhaps, all the partisans – leavers and remainers – should bury our differences and work together. That’s proving more difficult than it should be. No one in politics likes to concede defeat, particularly if they secretly dislike some of their opponents.

The EU referendum opened a chasm in our nation. Two different views: Britain versus Europe, migration versus integration; internationalism versus national identity, metropolitan versus small town, management versus the factory floor. The outcome was not just a shock, and for many it was hard to accept. The European Union, if not loved by many, was taken for granted as part of our political architecture. The “great repeal bill” is the latest staging ground of this fight. Really an adoption bill, it aims to transfer lots of EU legislation into UK law. Businesses, citizens and government agencies need a legal basis to conduct their activities – and this adoption process is essential to a smooth Brexit. But weak governments with complex bills are easy prey. When Theresa May went to the country in April, she claimed she needed a larger majority lest the opposition parties derail the process. Now it is her own benches to which she is casting worried glances. 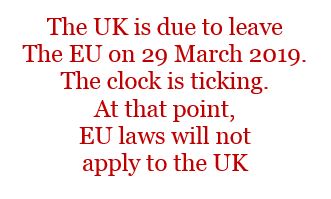 I campaigned for remain. And I want the UK to retain close ties to Europe and keep many of the benefits of easy trade, workers’ rights and co-operation. But I also recognise that managing migration – understanding public concerns beyond the big cities – will have to be part of any deal. This will require a tailor-made solution for the UK. But to start with businesses, citizens and government agencies need a legal basis to conduct their activities. This great adoption of EU law is essential to a smooth Brexit.
For that reason, I did not vote against the government’s bill. But nor did I vote with the Tories. I abstained. The UK is due to leave the EU on 29 March 2019. The clock is ticking. At that point, EU laws will not apply to the UK. So the UK must transfer or convert those laws and regulations into UK law; and in so doing, find agencies and competent bodies to supervise, implement, make charges, and enforce duties and obligations.

All sides accept the bill has flaws – whether out of laziness or conspiracy – especially the way in which it gives ministers too much power to change laws without recourse to parliament. I have much sympathy with the suspicions of many, not just Labour MPs, on this matter. Whether it wants to admit it now or have it dragged out in one of the nine parliamentary stages to come, the government will have to tackle this imbalance. But a defeat for the bill would not have halted Brexit, it would simply have delayed matters; adding to uncertainty. It wouldn’t have triggered another general election – whatever the Tories’ problems, their MPs are in no hurry to give Labour the opportunity to govern.

I appreciate that many hope that someone will find a way to stop Brexit, even if I don’t agree with that idea. But Brexit is proceeding. Preparations are under way to leave in 2019; so parliamentarians have a responsibility to help secure a Brexit with rights and laws intact, for our citizens and our future relationship with Europe.

What we need from government now is some consensus politics. It must not get carried away by its victory on Monday night, it must listen to the criticisms and work up some amendments – with the opposition if possible. It may consider Labour as the fox in the hen house, wreaking havoc and destruction. But soon the government will realise it has a huge bill to get through and it has serious problems. Some cross-party consultation could produce genuine agreement, forcing Labour to choose between amending and improving the bill, or simply opposing it. The government would be foolish to close the door to a dialogue with Keir Starmer and his team. A bunker mentality will only make the passage of the bill more acrimonious by the week.

Both sides need to dial down the rhetoric. The abuse I have received for my stance, in stark contrast to the easy ride given to some of my male colleagues, is completely unacceptable. Such vital, complex legislation demands an end to trench warfare. Yes, the bill has serious weaknesses, but they are issues which can be resolved – with cooperation.

This morning, the prime minister said: “We continue to encourage MPs from all parts of the UK to work together in support of this vital piece of legislation.” Fine words, but for the sake of the country May must show she is open to working across parties to make a better bill a reality.

This article was first published in the Guardian 12 September 2017.