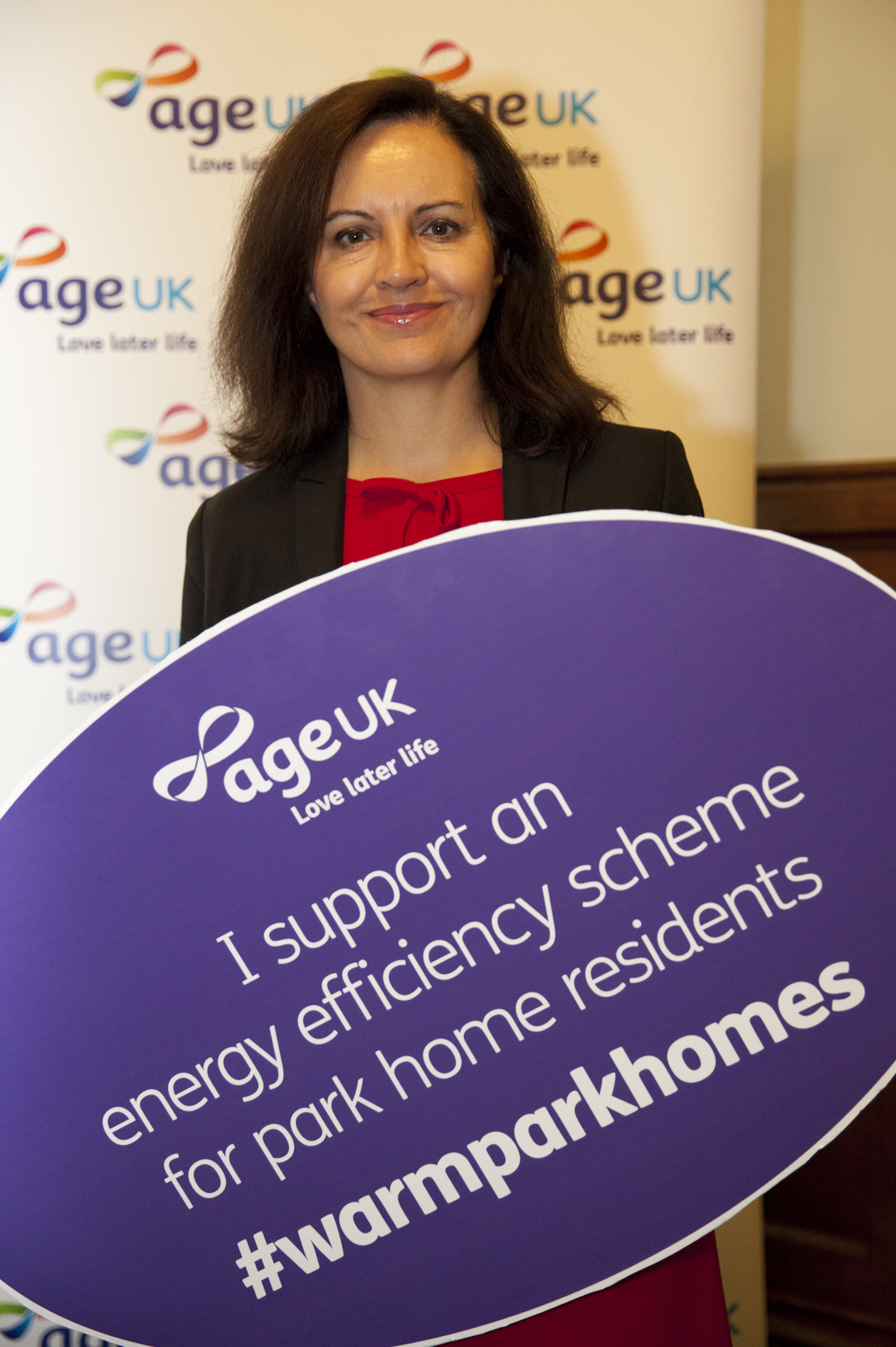 Caroline Flint has backed a campaign to end the scandal of cold park homes.

The Don Valley MP has written to the Energy Minister to demand an energy efficiency scheme tailored to park home residents.

Said Ms Flint:  “I was very grateful to a resident from Redhouse Park, Hatfield Woodhouse, who drew this campaign to my attention.  I have several park home sites in the Don Valley constituency, and I know many older people really enjoy living in park homes across Doncaster.  But the very high energy costs and lack of insulation means many of these properties can be very cold over the winter months, leaving residents struggling to keep warm.  Many of the park homes are more than ten years old, which means they have little insulation and were built for summer living.

“I welcome the Age UK report and I have written to the Energy Minister asking for park home residents to be supported to bring their homes up to modern day energy efficiency standards to enable them to stay warm affordably over the winter.  To achieve this, I fully support Age UK’s campaign calling on the Government to provide a specialist energy efficiency scheme for Park Home residents.  This way they can continue to live in their homes and enjoying our wonderful area without jeopardising their health and wellbeing”.

Tens of thousands of older people living in park homes (static mobile homes) are putting their health at risk as they struggle to keep warm over the winter, due to the high cost of heating this particular form of accommodation, according to research by Age UK.

Said Ms Flint:  “Cold park homes are a particular worry because the residents are older people, often with limited incomes and are more vulnerable to low temperatures and that exposure to the cold increases their risk of flu, chest infections and other respiratory problems.  It is high time the Government brought these residents in from the cold and tackled this ongoing problem.”

The Charity’s new campaign is calling on the Government to roll out a specific energy efficiency scheme to help park home residents reduce their heating bills and keep warm and well over the winter.  This is a particular issue in Don Valley, which has park home sites in a number of areas, including Thorne, Tickhill, Warmsworth and Hatfield Woodhouse.

In the UK, around 100,000 people aged 65 plus are estimated to live in this type of prefabricated bungalow, which appeals to many older people as an attractive and seemingly more affordable option than a traditional home.  Yet the reality is that those park homes that were constructed before newer building regulations kicked in – and that’s the vast majority – are very poorly insulated and off the gas grid, making them extremely difficult and expensive to heat.  Age UK’s new report ‘Don’t Leave Park Homes Out In The Cold’ looks at the challenges that park home residents face in being able to buy enough energy to keep warm, and explains why Government schemes such as the Green Deal and ECO have done very little to help.
In a new Age UK survey of over 200 park home residents aged 65 plus, over half reported they faced problems staying warm in their home over the winter months and a similar proportion said their health problems were made worse by cold weather2.

Around 1 in 4 of those surveyed spent a quarter to a third of their income on heating their home – a huge amount for them considering that the majority of park home owners are retired and living on a low fixed income.  The high cost of heating fuel (66%), poor insulation (67%) and being off the gas grid (49%) were cited by them as the main barriers to keeping warm.  An estimated two out of three residents spent such a large proportion of their income on keeping warm that they were ‘officially’ in fuel poverty.

For those respondents facing difficulties keeping warm, four in ten reported going to bed early and twenty per cent cut back on food in an effort to pay their heating bills.  Others said they sometimes wrapped themselves in blankets with hot water bottles in the daytime and only heated part of their park home – which typically wouldn’t be very big in the first place – in order to manage their energy costs.

The Age UK research found that cost is the main barrier to residents fitting insulation in their homes, with half reporting that Government schemes hadn’t helped them.  Many park home owners are unable to access financial help to improve the energy efficiency of their homes because they don’t have their own individual electricity meter.  This means they can’t switch to get the best deal or benefit from Government help for low income pensioners such as the Warm Home Discount.

Caroline Abrahams, Charity Director at Age UK says: “Park homes can be idyllic in the summer but many older residents have told us that they have found to their horror that they are very poorly insulated and therefore prohibitively expensive to keep warm when it gets cold.  A significant number know they can’t afford the huge bills they are racking up and so they are putting their health at risk by turning the heating down or off when they really need the thermostat up high. The Government created schemes such as the Green Deal to assist people who can’t afford to keep warm, yet because of the kind of accommodation they are living in most park home owners have been unable to access any help, even though their homes are more likely than most to need better insulation.

“To achieve this we suggest investing cash leftover from the Government’s Green Deal Home Improvement Fund to set up a special scheme to help park home owners. Not only would this improve their health and wellbeing over the cold winter months, in the longer term it would help reduce illness and demands on NHS, making it a win: win for everyone.”