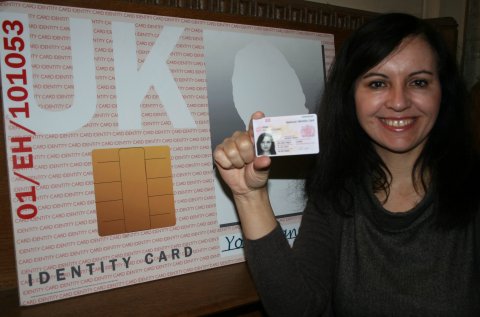 Caroline Flint, the first person in Doncaster to receive a national identity card, has challenged her Tory opponent to back the scheme.

Ms Flint said:  “Any body can apply for an ID card.  I wanted an ID card because, unlike driving licences and other forms of ID, it links my finger prints and facial recognition to my identity, making it harder for anyone to steal my identity.  The National ID card is also a recognised travel document across Europe.”

The Don Valley MP challenged the local Tory parliamentary candidate to support cards as part of a tougher response to illegal immigration.

“All foreign national from outside of the EU must have an ID card, so that a person’s right to be here to study, work or live, is established.  The ID card is one of the most effective tools in combating illegal immigration and cross border crime.

“I challenge my Tory opponent to tell me that they have a better answer to illegal immigration than an electronic border and biometric ID cards, backed by a UK Border Force and a tough points system so that only those whose skills are in demand can come into the UK.”

The Don Valley MP also welcomed the setting up of local immigration enforcement teams, which will target those living or working here illegally.  “The Tories talk tough, but vote soft.  They question our border controls, they oppose ID cards for foreign nationals – they even opposed fines for road hauliers who attempt to smuggle in illegal immigrants and wanted to water down the fines we impose on employers who benefit from illegal working.

“Even the Tories’ proposed “cap on immigration” is a joke.  Their “cap” only applies to just 1 in 5 of all the foreign nationals who come into the UK.  Labour’s points based system covers a majority of migrants and is far more effective, which is why they use it in Australia.

“In these days of widespread international travel, cross-border people trafficking, and terrorism, it is vital that our immigration system is up to the challenge.  It is also right that our border force has the right powers to detain and fingerprint – and when people enter the UK, we have their details recorded.

“The system will also help to stop fraudulent access to benefits and public services.”