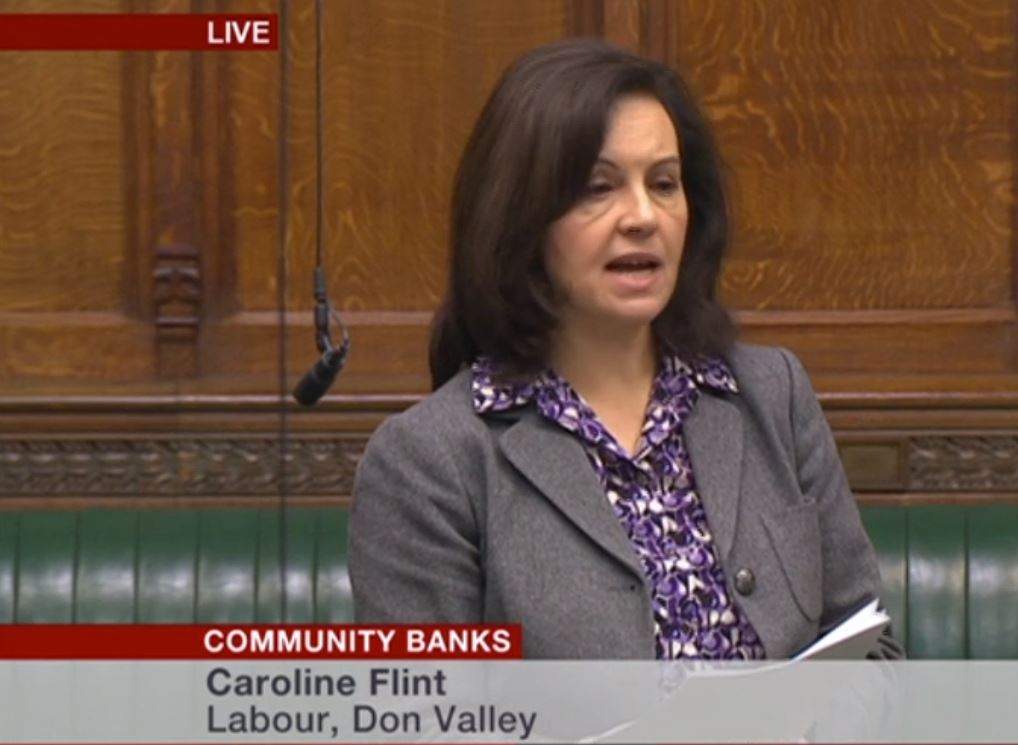 Read my speech in the Commons debate on Community Bank Closures

I am sure that we all heed your words, Madam Deputy Speaker, and thank you for your consideration this afternoon. I congratulate my hon. Friend the Member for Stoke-on-Trent North (Ruth Smeeth) and the hon. Member for Hazel Grove (Mr Wragg) on securing the debate.

I listened very carefully to the right hon. Member for Arundel and South Downs (Nick Herbert), but I am afraid that he seemed to be talking himself into a bank closure. Of course, this debate is about banking services, but I hope that we can also focus on the need to think creatively about the sort of sustainable bank — a community hub — that is necessary. This is perhaps not necessary in our cities, where we can walk down the street and pass six banks in half a kilometre, but it is necessary for our small towns and semi-rural communities around the United Kingdom. For them, it is the bank’s presence in a new sustainable form that we are fighting for and championing today.

In August 2017, Reuters reported that bank branches across Britain had closed at a rate of 300 per year since 1989. The Daily Mail reported in December 2017 that over 1,000 branches had closed in 2015 and 2016, and a record 802 branches closed in 2017. The accelerating pace of closures appears relentless. In my constituency, the town of Tickhill lost its last bank in 2015. In 2016, the town of Thorne lost its HSBC branch. Then, in November 2017, RBS served notice that the town of Thorne will also lose its NatWest branch, and the town of Bawtry is to lose its last bank branch, also a NatWest.

The previous Government’s response to this relentless wave of bank closures was to announce an access-to-banking protocol in March 2015. It is now clear that the protocol was not what it seemed. It laid out a timetable for consultation about impact and the provision of alternative banking, but no—I repeat, no—mechanism to stop a branch closing. So the process for closure has been determined, but a mechanism to halt a closure is non-existent. Communities have no more chance of stopping the closure than they did in 2015. The Government have done, and are doing, nothing to change this. “It is a private matter; it is a commercial matter”, we have been told on several occasions during Prime Minister’s questions in recent times. The Government decline to ​collect statistics on closures or on how many communities are now without any banking service. It is as though closures were an inconvenient truth.

The banks would have us believe that this is a story of enlightened pensioners managing their ISAs and direct debits on their smartphones. The truth is somewhat harder to get to. This House, I believe, is not nostalgic, nor opposed to telephone or smartphone banking. We are not against people managing payment on their PCs. But the selective figures provided by RBS-NatWest to justify closure give a completely distorted impression of their NatWest branch to each of the towns in Don Valley. For example, RBS was keen to tell me that 88% of Bawtry customers and 86% of Thorne customers now bank in other ways, and that only 48 customers in Bawtry and 69 in Thorne attend the branch on a weekly basis—although the time period for this estimate was not provided to me. Yet when a member of my staff went to the Bawtry NatWest midweek in mid-January—a quiet post-Christmas week—they saw a queue outside the bank before it opened at 10 am, and at 10.45 am they found a queue more than 10 deep in the bank, with several counters in use. But when I asked RBS how many transactions took place at the Thorne and Bawtry branches in the first hour of each day since the new year, the bank refused to disclose this information. It was “commercially sensitive”, I was told. Nor would RBS furnish me with information on what proportion of the customers are pensioners, how many transactions took place at each branch in the past year, or why neither branch opened on a weekend. On a Saturday morning, footfall could be more frequent.

So much for dialogue and consultation. Well, I say this to Ross McEwan, RBS’s chief executive, and to Les Matheson, NatWest’s chief executive, personal and business lending: please do not patronise me with offers to meet a “senior representative” when you refuse to provide any information that may demonstrate that small businesses, pensioners or the community generally may need the services provided in the Thorne and Bawtry branches more than you care to admit. In response to a question about the possibility of branches sharing premises to make them more viable, I was told by Mr Matheson that NatWest’s arrangement with the post office means that the post office is now “the shared premises”. On that basis, why have any branches at all? The post office is the NatWest!

Where is the genuine attempt to find a model for sustainable banking? Instead of small counters in corner shops, why cannot post offices be located in secure bank premises, sharing them with more than one bank? Why cannot several banks have staff in Thorne or Bawtry on different days of the week, with banks sharing overheads in secure premises to create, as my hon. Friend the Member for Stoke-on-Trent North said, a community banking hub? That could be a win-win situation.

Where is the attempt to bring young people into branches—some real outreach to make them see the bank as more than an app on a smartphone? I do not know about colleagues around the House today, but I am always being lobbied by banks about their latest wheeze to provide for financial inclusion. They are always telling me about how they want to do more in our schools and communities to give people the skills not only to press a button on a computer or click on an app, but to understand what financial literacy really means. ​They are always lobbying us, but I do not see any effort to attract young people into branches to help them with financial decisions. Let us not stop at young people. Many of my constituents do not have a bank account at all and have never had one, and there are plenty of other people who still do not know quite how to go about getting a mortgage, how to run an ISA, how to save, or how to pay off debt.

Ged Killen: My right hon. Friend is making an excellent point about the role of banks in attracting people into the branches. Does she agree that what many banks have been doing over a number of years is trying to drive people out of their branches by taking essential services away from those branches?

Caroline Flint: I absolutely agree with my hon. Friend. One would think that banks did not really want to foster demand for real branches, so the case for closure is made for them. They are creating a self-fulfilling prophecy.

Parliament needs to demand more from Government and more from the big five banks, beginning with support for local communities. While branches cluster in large cities in lavish offices, outlying towns and villages are being denuded of bank branches that are anchors for local businesses. We are told that the average customer travels just 2 to 2½ miles to their nearest bank branch. I worry about figures like that, because what they really mean is that the banks estimate all the access across the UK and then divide it, so of course the figures will be distorted by the density of branches in our cities.

Ruth Smeeth:  I thank my right hon. Friend for making such a passionate speech on this subject. One of my issues with the journey times quoted is that I do not believe that any of these journeys have ever been done on public transport. The figures do not take account of how many bus changes may be needed, nor the fact that some of these places are not connectable on public transport. The numbers do not make sense. Does she agree?

Caroline Flint: My hon. Friend makes such an important point. There are so many assumptions about the way that people live their lives today that bear no relation to our own experience, let alone that of our constituents. In my constituency, people are 10 to 20 or more miles away from their nearest branch. We do not hear about the 10% to 20% of people across the UK who are in that situation. Customers in Thorne and Bawtry will each travel 10 miles if their NatWest branch closes. As my hon. Friend said, many of those people do not have access to a car. For many of my constituents, getting into Doncaster town centre takes at least two buses, and they are not necessarily running every five minutes—unlike the service that many of my friends benefit from in London and the big cities. The problem is simply not recognised.

Do the Government really wish to support our small towns to regenerate and develop? In both Thorne and Bawtry, the past 10 years have been tough, but—this is the irony—we are, I am proud to say, now seeing a ​renaissance in those towns. That is fantastic, but at this tipping point we are in danger of losing our last bank. It just does not make sense.

If we want to halt the growing gap between city and small town Britain, we need a policy to keep bank branches open in a more creative and sustainable way for the future. It cannot be right that towns with a population of 4,000 or 5,000 in the immediate vicinity, let alone the many thousands beyond that in even smaller villages, are losing not just the banking services but the presence of a face, rather than just a till, machine or counter in a convenience store for their financial needs.

Bawtry and Austerfield, which has 4,000 people, will soon have no bank. Strathaven is a market town with 7,500 people, Hornsea has 8,000 people, 40% of whom are over 60, plus thousands of tourist visitors every year, and Pencoed has 9,000 people—all those communities are soon to be left with no bank, and the Government need to do something about it. They could begin by collecting and reporting data on bank branches and the rate of closure, to face the uncomfortable truth about the loss of services in small town Britain.

The Government cannot be neutral on this matter. Their mandate derives from the British people, not UK Finance. This is not about neo-luddism. We are not anti-technology. This is about inclusion and equality. I urge the Minister and his Treasury colleagues to act before branch networks are a thing of the past.