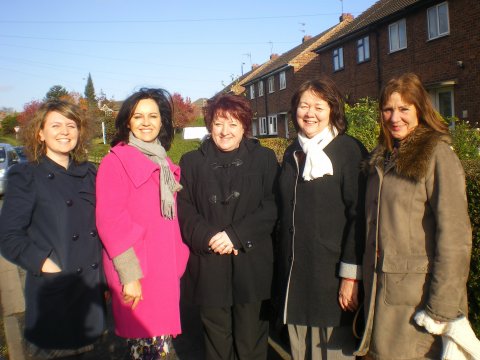 Women are taking centre stage in Labour’s winter message as Labour campaigners hit the doorsteps in Thorne and Hatfield this week.

Said Caroline:  “This week the Chancellor announced cuts to tax credits and public sector pay changes, and these changes have hit women twice as hard as men.  The Chancellor has done this when he knows how families are being squeezed by falling living standards and soaring energy bills.”

Energy prices were one of the biggest concerns said Susan Durant:  “We are meeting older people very worried about soaring energy prices while the Government has cut winter fuel payments by £50 for the over 60s and £100 for the over 80s.”

Pat Haith said that families are facing one of the worst Christmas’s for decades:  “The Government is really out of touch with families if they don’t realise what incredible pressure families are under this Christmas.  And all the Chancellor promised was more misery to come.”

House of Commons research figures show that the changes to direct tax and pay in the Autumn Statement once again hit women more than twice as hard as men.

Of the £2.37 billion raised from tax credits and public sector pay changes in this Autumn Statement, the House of Commons Library estimates that 73 per cent (£1.73 billion) will be coming from women and 27 per cent (£638 million) coming from men.

The changes to direct tax, benefits, pay and pensions announced by the Chancellor since the General Election, shows £18.9 billion extra that the Government is raising each year.  £13.2 billion is coming from women and £5.7 billion from men.