Yorkshire has big ideas - my article for the Yorkshire Post 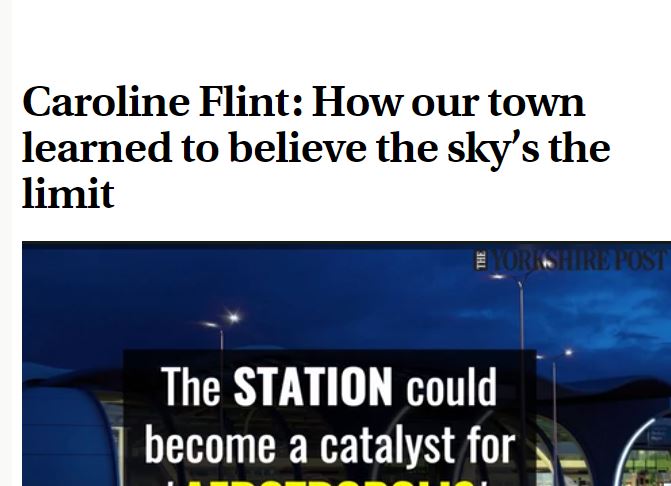 Doncaster is a changing place. Like many coalfield communities it has seen its share of hard times.

As the noughties approached, the last of the collieries were hanging on; the future of rail in the town appeared uncertain; the Council had been through troubles of its own; tourism hinged around the annual St Leger festival; and the former Finningley RAF base’s future was being contested.

Like much of Yorkshire, Doncaster’s past was slipping away, but the future wasn’t quite within reach.

Twenty years on, I live in a borough with a new optimism, led by Mayor Ros Jones.  Industrial parks, like the iPort on the M18, are generating new jobs, home to Amazon and Lidl. The Hitachi Train Maintenance Centre is leading a rail resurgence; and the first apprentices enrolled at the new National College for High Speed Rail, preparing for High Speed 2. Doncaster’s Cast theatre is part of a cultural renaissance. The town hosts the Tour de Yorkshire each year; Doncaster Racecourse has a new hotel development and the Yorkshire Wildlife Park is the fastest growing tourist attraction in the North. I never envisaged I would be MP to a pride of lions and four polar bears!

At the heart of Doncaster’s new optimism, and symbolic of Doncaster’s renewal, is Doncaster Sheffield Airport. When I was first elected in 1997, an airport seemed a long way off.  I recall an adviser in Number Ten saying: “An airport in Doncaster? They’ve got Manchester airport haven’t they?”

How wrong he was.  Doncaster and Yorkshire’s future lies in connectivity.  As towns and cities grow, connecting people to jobs, culture, shopping and visitor attractions, is crucial. Doncaster borough, surrounded by major trunk roads, M1, M18, M62 and the A1, lies on the East Coast Mainline, soon to have Super Express trains reaching 140mph, currently being built by Hitachi in Durham.  The Humber Ports are an hour away.

It took six years to see a redundant RAF base become the first UK airport to open since Stansted in the 1970s. Now serving 45 destinations, it supports 100 businesses and 1,000 jobs at its Aero Centre Yorkshire business park. This airport is proof, if ever needed, that airports act as magnets for economic activity.  The airport attracts inward investment into this region, and anchors one end of an innovation corridor stretching to Sheffield City Centre, embracing the Advanced Manufacturing Innovation District.

With the construction of the Great Yorkshire Way, over 6million now people live within 1 hour’s drive of Doncaster Sheffield Airport; and journey times to Sheffield have been cut to 25 minutes.

But ambition doesn’t end there. Yorkshire has been hindered by poor connectivity.  It hampers growth and leaves communities behind.

The North looks enviously at London, with its amazing public transport and the £14.8billion Crossrail project, complete with 26 miles of tunnelling under the capital.

Now we are making demands of our own for new infrastructure.  As a Co-Chair of the Northern Powerhouse All Party Group, I’m part of a coalition of MPs and civic leaders championing HS3 – a high speed Liverpool to Hull rail service we want built in parallel with HS2. Presently 3–3.25hours, without delays, that journey time should be halved.

For Yorkshire to punch its weight, to keep up with the South East, we need to see crucial infrastructure projects delivered. Part of that vision includes a new mainline station on the East Coast Mainline, in walking distance of the Doncaster Sheffield airport terminal; putting 8million people within 90 minutes by public transport. The ambition must be a trouble-free connection for passengers from train to plane with minimum disruption.  An airport station that will also support a growing commuter population and visitors to our wildlife park.

None of these projects would be underway without long term vision.  Ideas turned into investment; into infrastructure; into jobs and homes.  Ideas that turn decline and uncertainty, into confidence and progress.  Every Yorkshire town and city has been on its own journey.  Many have ambitions to regenerate; to grasp the future, rather than dwell on the past.  The Yorkshire Post has championed this rebirth of Yorkshire.

In Doncaster’s case, the renaissance underway today - cultural, tourism, economic, transportation – probably started with a piece of disused tarmac,   2.9kilometres long.  The longest runway outside of the South East which, with new infrastructure, could support 25million passengers and 250,000 tonnes for cargo each year.  It took vision to see that tarmac become the economic driving force it is today.  To overcome the scepticism.  To give Doncaster self-belief again.

I look back with satisfaction at how much has been accomplished and at the determination to achieve more.

We are seeing not only a resurgent South Yorkshire, but a new determination across Yorkshire and the North.  Our best days are in front of us.  Let’s make it happen.

Caroline Flint is Member of Parliament for Don Valley & Co-chair of the Northern Powerhouse All Party Parliamentary Group.